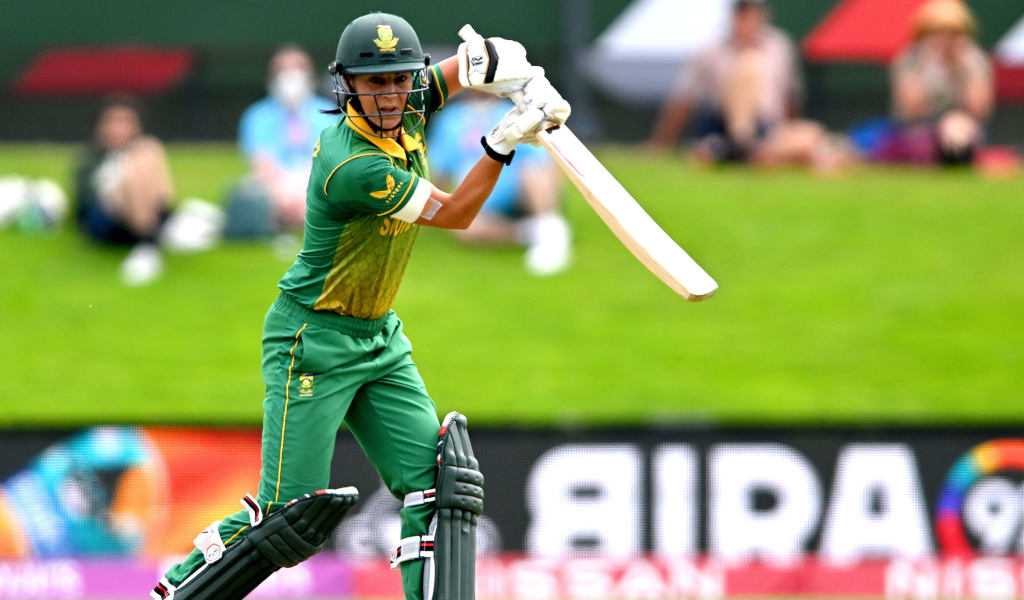 Put in to bat in Dunedin, the Proteas were bundled out for a below-par 207 with Marizanne Kapp (42) and hard-hitting Chloe Tryon (39) lifting them to a competitive total.

Bangladesh made a steady start, reaching 69 for one before Khaka let rip and reduced them to 85 for four.

A late flurry from Nigar Sultana and Ritu Moni came too late as they managed 175 as South Africa prevailed by 32 runs in Dunedin.

Sune Luus’s side felt the absence of Lizelle Lee in a ponderous start to their seventh World Cup campaign, with Bangladesh excelling from the start in a fearless display.

Teenager Fariha Trisna should have dismissed Tazmin Brits with her second World Cup ball, only to watch Nahida Akter spill a dolly of a catch at mid-on.

Jahanara Alam’s experience and Trisna’s youth made for a pleasing new ball partnership and it took Brits 19 balls to get off the mark when she lifted the latter for four over mid-on.

Brits, a former world junior javelin champion, never got off the ground and flicked to Rumana at midwicket, departing for eight at 30 for one.

Wolvaardt and Lara Goodall steadied the ship with the powerful opener profiting from the introduction of spin, carving Salma Khatun’s second ball for four behind point.

Despite the odd loose delivery from Khatun, including a half-tracker that Wolvaardt dispatched, scoring wasn’t fluent as South Africa reached 67 for one from 20 overs.

Medium-pacer Moni’s nagging accuracy was rewarded with the big wicket of Wolvaardt as she drew the ball back through her defences, dismissed for 41 from 52 balls.

One brought two for Bangladesh as Khatun induced Goodall into a mistimed reverse sweep that Rumana Ahmed pouched down to her left, making it 69 for three.

Mignon du Preez initially took a liking to Rumana’s loopy leg spin but patted a simple return catch back to the bowler as her side sunk still further.

The experienced pair of Kapp and Luus took control with three boundaries off Nahida Akter but were separated when Rumana deflected a Kapp drive back onto the stumps with Luus short of her ground.

It was left to Tryon to inject some late life into a faltering innings and an 80-metre six off Rumana in the 38th over wasn’t a bad way to start.

Both Tryon and Kapp peppered the boundary in a brilliant 71 stand at better than a run-a-ball, with Tryon thumping Khatun over long-on for a mighty maximum.

The 28-year-old looked to go big again but was caught at mid-off for 39, heralding a flurry of late wickets. The last four went down for 14 runs inside five overs as South Africa subsided.

The Proteas went in search of early wickets with aggressive lines and lengths but were met with stoical resistance from Bangladesh.

Wolvaardt got a paw to a tough chance to get Sharmin Akhter in the fifth over but could only tip it over the bar and nearly took one that fell inches short of her a few balls later.

That was as good as it got for South Africa in their quest to halt the debutants’ momentum and Kapp let out a cry of frustration when Sharmin edged for four through the slips.

Sharmin and Shamima Sultana were circumspect early on but did flirt with danger, taking a thoroughly ill-advised single in the 14th over, saved only by cover point’s hesitation to throw.

They took two fours off Luus the over before the drinks break, taken at 59-0, with Sultana then dropped at slip and escaping another possible run out.

Khaka made the breakthrough by beating Sultana’s drive and bowling her for 27 at 69 for one.

She twisted the knife with two in an over, first getting Sharmin (34) to feather behind and two balls later Murshida Khatun guided another edge to Trisha Chetty.

Poor running between the wickets was finally punished when Fargana Hoque was run out for eight and the brilliant Khaka brought up her century when Rumana nicked to Chetty.

Bangladesh wouldn’t go away and Nigar Sultana and Moni built a half-century stand, the latter’s stroke-making offering more than a glimmer of late hope.

That hope flickered out when Moni was bowled by Ismail for an excellent 27 and two further wickets saw Bangladesh finish on 175 all out.