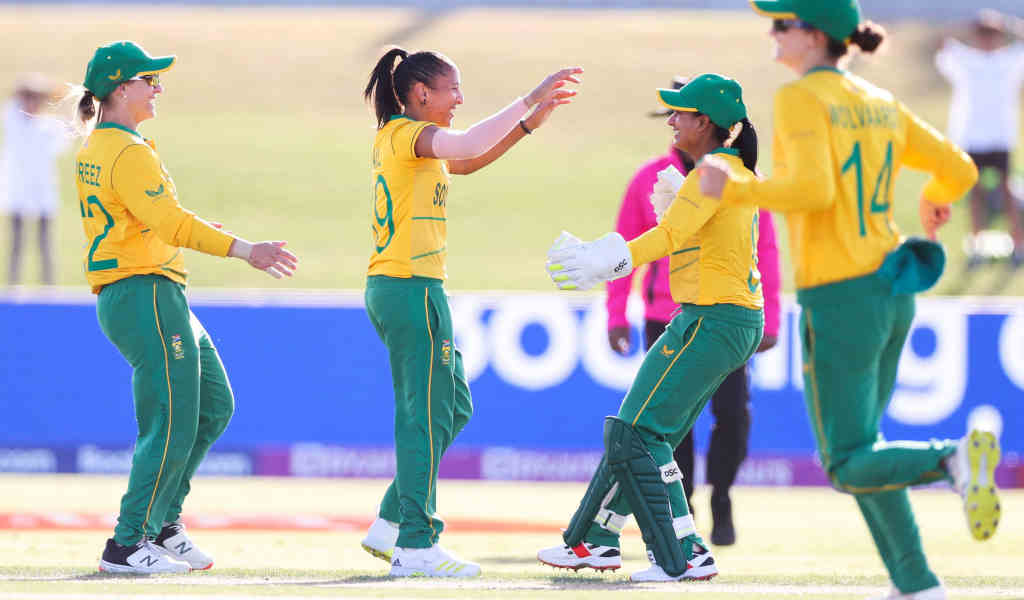 South Africa’s slow start was rescued by Laura Wolvaardt, whose 75 runs was her highest score in a World Cup, but the Proteas could still only set Pakistan a below-par 224 to win.

Pakistan built healthy partnerships but fell way behind the run rate thanks to disciplined bowling and they fell agonisingly short despite all-rounder Nida Dar’s fine 55.

Lizelle Lee’s return to the South Africa side lasted only seven balls before she was expertly caught behind by Sidra Nawaz.

Sidra would take another fine diving catch as Tazmin Brits was dismissed for two runs to leave South Africa on 21 for two, her move down the order not paying off.

Her former opening partner Wolvaardt made steady progress to her eighth 40-plus score in nine World Cup innings.

It wasn’t all plain sailing for Wolvaardt and South Africa however, the Proteas reaching just 65 for two in the first 20 overs before back-to-back boundaries off Ghulam Fatima saw the 22-year-old move to 56 from 76 balls.

Ghulam would get her revenge as Wolvaardt had to go, caught and bowled for 75 off 91 balls as Ghulam earned a wicket on her return to the ODI side after five years in the wilderness.

Mignon du Preez would fall for a duck in the same over as Omaima Sohail pulled out another diving catch to add to Pakistan’s highlight reel.

Marizanne Kapp could only hold her head in her hands as she sent the ball straight to Sidra Ameen as Ghulam took another and South Africa slipped to 120 for five.

Having survived two reviews for lbw earlier in the innings, Sune Luss showed restraint as she and her vice-captain Chloe Tryon added 55 for the sixth wicket before Tryon departed softly for 31 as she was caught and bowled by Nashra Sundhu.

It was third time lucky for Pakistan as Luus was finally dismissed lbw but not before scoring 62 from 102 balls.

It was then Fatima Sana’s turn to take two in an over, dismissing Shabnim Ismail and Trisha Chetty as South Africa ended on 223 for nine.

Ismail then returned the favour in the fourth over of the reply as she reduced Pakistan to 26 for two in a double-wicket maiden, dismissing Sidra Ameen and Bismah Maroof back-to-back, both sending edges to fielders.

Omaima joined Nahida Khan at the crease and her first act was to miss the hat-trick ball attempting a cut shot.

She and Nahida put together a valuable 50 partnership, the first for the pair in ODIs, coming off 81 balls, before Nahida would go for 40 off 71 as Ayabonga Khaka picked up her fifth wicket of the tournament, ending the 69-run partnership.

Nida Dar joined Omaima, who continued her fine run-scoring, bringing up her 50 from 83 balls with a quick single off Ismail.

Pakistan then went 44 balls without a boundary before a brave chip down the ground for four from Omaima reminded South Africa that Pakistan were still in the chase.

Nida and Omaima then piled on more pressure sending Masabata Klaas for 11 runs only for Klaas to dismiss Omaima for 65 off the very next ball, with Lee taking her 50th catch in ODIs.

The dangerous Aliya Riaz did not trouble the scorers, dismissed for her first duck in two years to leave Pakistan needing 79 runs from 70 balls with five wickets remaining.

Fatima played an entertaining knock of nine from eight balls before being dismissed lbw by Khaka and Sidra would soon follow.