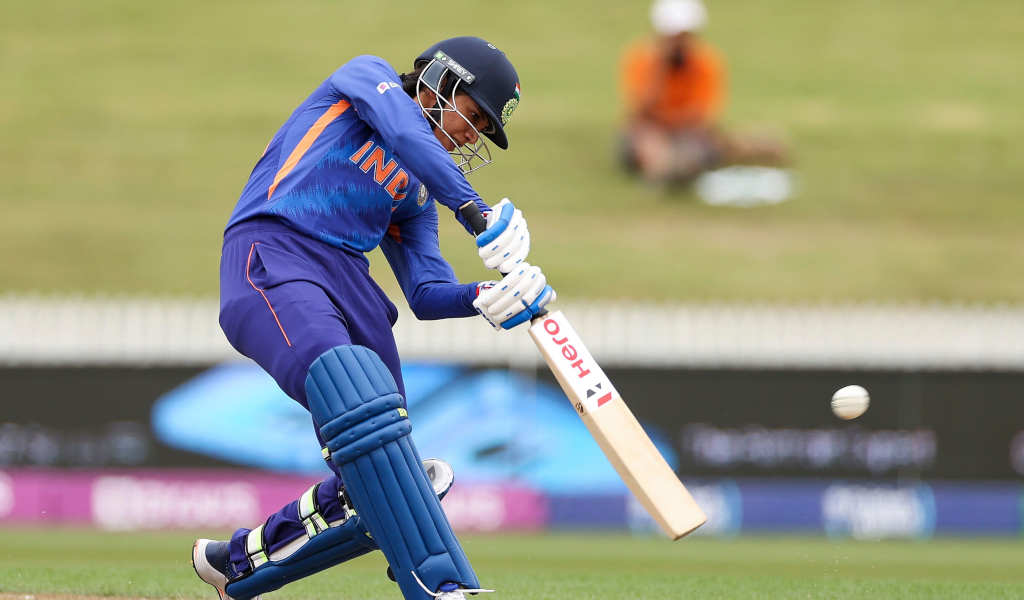 Women’s World Cup hundreds from Smriti Mandhana and Harmanpreet Kaur powered India to a 155–run win over the West Indies in Hamilton.

Deandra Dottin looked set to steer West Indies all the way, guiding her side to 100 in 12 overs, only for her dismissal to start an unrecoverable collapse.

India won the toss and chose to bat, meaning previously unbeaten West Indies would have to chase for the first time in the World Cup.

Yastika Bhatia made a fast start to the innings taking Chinelle Henry for three fours off the second over before dynamic fielding from Dottin saved more boundaries.

Shamilia Connell would also be taken round the ground before Shakera Selman came in and got the first wicket, catching Bhatia off her own bowling for 31 from 21.

Mithali Raj, captaining in a World Cup record 24th game, came out to join Mandhana but could only make five from 11 before being caught by Connell to leave India on 62 for two at the end of the powerplay.

Deepti Sharma was the next batter to make a start before being dismissed, but she could be forgiven as Hayley Matthews took a stunning, stretching catch at slip as she departed for 15.

Mandhana and Harmanpreet Kaur were unfazed, the former’s half-century brought up from 66 balls to earn her 22nd fifty in ODI cricket.

The duo brought up their hundred partnership off a Selman no-ball, a fourth 100-run fourth-wicket partnership for India in World Cups, with Kaur part of three of them.

The next delivery would bring another milestone as Kaur’s 50 came from 61 balls, her first back-to-back ODI half-centuries since the last World Cup in 2017.

Mandhana was put down by Aaliyah Alleyne on 94 before bringing up her hundred from 108 balls with a four as the 150 partnership was also reached.

She would have to go for 123 from 119 balls as Selman held on to a catch in the deep as Connell picked up her first wicket in her final over.

Kaur would bring up a century at a third successive World Cup before sending a tame outside edge to Shemaine Campbelle behind the stumps, India slipping to 313 for seven after Pooja Vastrakar and Richa Ghosh were dismissed cheaply.

India ended on 317 for eight, their first-ever 300-plus total in World Cup cricket, with Dottin clearly in pain bowling the final over.

The West Indies came out undaunted despite Dottin’s clear discomfort, crashing 50 in the first five overs.

With the hundred raised just seven overs later, but after Dottin had taken treatment on the field, her innings came to an end, making 62 of just 46 balls with 10 fours and a six.

Kycia Knight and Stafanie Taylor fell cheaply to leave the Maroon Warriors on 112 for three, with opener Matthews dismissed for 43 from 36 balls, her disappointed reaction telling you everything you need to know, their chance had gone.

Campbelle and Henry would soon follow as the life was suffocated out of what had been a rip-roaring chase by the West Indies.

Chedean Nation had helped steady the West Indies against England but chasing a record total was an altogether different prospect.

With Nation looking for quick runs, Alleyne had to go run out chasing a second thanks to sharp throwing from Rajeshwari Gayakwad who formed a potent spin partnership with Sneh Rana.

Mohammed then played a patient game taking fourteen balls to get off nought as the Windies delayed the inevitable.

She then became Goswami’s 40th victim at a World Cup as she was caught going for a mistimed heave before the West Indies were bowled out for 162 as Rana took the winning catch off her own bowling.