No more miracles as illness-ravaged England fall short at Centurion 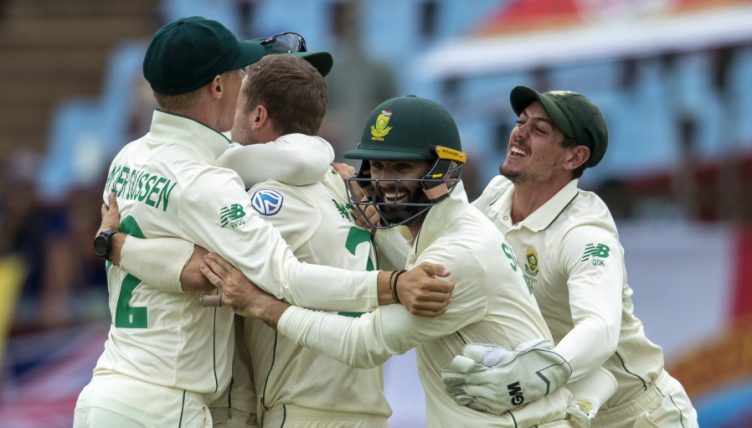 England fell 107 runs short in their quest to produce a record-breaking run chase as South Africa picked up their first red ball victory in six in the Boxing Day Test at Centurion.

An illness-ravaged England tried manfully to snatch an early victory in the four Test series, but despite the return to action of under-the-weather batsmen Joe Root and Jos Buttler, the Three Lions ultimately fell some way short in the end.

The tourists arrived at Centurion’s SuperSport Park harbouring hopes of another improbable victory and a record chase of 376, channelling memories of their World Cup final win at Lord’s and the Ashes miracle at Headingley, but found themselves all out of escape acts.

Even Ben Stokes, the starring act in both of those dramas, could not find it in himself to defy cricketing logic one more time.

Against a spirited, talented and united South African attack they were bowled out for 268 late on the fourth afternoon to go 1-0 behind in the four-match series.

FULL SCORECARD: Rabada, Nortje the tormentors as England slip to defeat at Centurion

Romantics and superstitious fans would have found brief hope in Stokes’ arrival at the crease with 218 runs needed to win – the exact figure required when he strode out at Leeds in August – but his departure for 14, bowled by the left-arm spin of Keshav Maharaj was the biggest body blow of all.

Rory Burns top-scored with 84, only seven of which were made on Sunday, while captain Joe Root contributed a committed 48, but the momentum never really left the Proteas.

Kagiso Rabada claimed four for 103, Anrich Nortje three for 56 and there was sound support from Vernon Philander, Maharaj and Dwaine Pretorius.

Burns had methodically chipped 77 runs off the target on day three but South Africa applied the squeeze at the start of the day, allowing just two scoring shots in the first seven overs. The first was a thick outside edge from Joe Denly, who then caught everyone by surprise by thrashing Rabada for six.

Burns found it harder to loosen the shackles, taking 34 minutes to open his account for the day and only then with an overthrow from short-leg that should have seen him run out. The Surrey man brought about his own demise, impatiently pulling Nortje and offering the gentlest of catches.

Denly was unabashed and picked up a second six in risky fashion off Rabada, who would have been celebrating a wicket had Nortje not completely lost sight of the trajectory. Denly had bustled his way to 31 when he was thumped on the pad by Pretorius, who won a tight lbw decision upheld by DRS.

His departure brought Stokes to the middle and with him a bristle of expectation around the ground. There was nothing flashy about his early moments at the crease, settling in beside Root to usher England to lunch with 205 still needed.

From 121 for one they had scored just 50 for two but as long as their two leading lights were in tandem, hope remained.

Root was having the rougher ride, wearing nasty blows on the glove and wrist, but was sticking to the task and located the ropes at third man and midwicket to keep the board moving.

England made their move at the start of the afternoon session, first nudging the target under 200 then going after Maharaj.

His first delivery after lunch was swept emphatically for four by Stokes, who proceeded to skip down the track and carve the left-armer over cover. By the time Root chopped a short ball past point England had taken 13 from the over and asked fresh questions of South Africa’s nerve.

Maharaj took it on himself to provide the answer himself, finding a good length outside Stokes’ off stump and extracting enough turn to make life difficult. Stokes looked for his cut shot but was beaten, losing off stump after the ball skimmed glove and pad on its way through.

The celebrations of the fielding side suggested the heavy lifting was now done, a notion Jonny Bairstow did little to dispel. After clipping Rabada’s first delivery with the second new ball off his pads for four he wafted at the next as it left him off the pitch.

A thick outside edge flew towards Zubayr Hamza, who made it safe before tumbling backwards. Nortje landed the big one when he returned to the attack, finding Root’s edge with pace and precision in the channel outside off.

That kicked off a sequence of five wickets for 36, with the innings wrapping up in unedifying fashion for the tourists. Nortje had Jofra Archer caught at slip and Rabada scattered the rest of the tail, winning his duels with Sam Curran and Jos Buttler then flattening Stuart Broad’s stumps to draw the curtain on proceedings.

South Africa take a 1-0 lead in the series, with the second Test in Cape Town to begin on January 3.