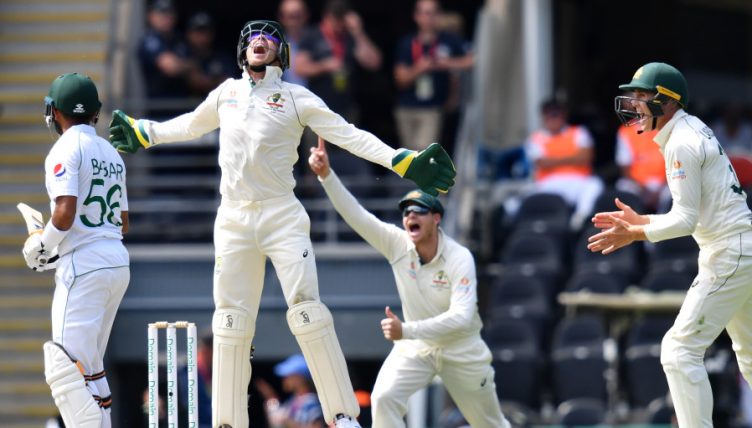 The Aussies’ fearsome triumvirate of fast bowlers Josh Hazlewood, Mitchell Starc and Pat Cummins combined for nine wickets as Pakistan fell to a crushing innings-and-five-run defeat to Australia with a day to spare in Brisbane.

The Gabbatoir once again lived up to its reputation as fortress Australia as the hosts emerged victorious after long periods of superiority with both bat and ball.

David Warner and Marnus Labuschagne had both laid the foundations for success with ‘daddy’ hundreds earlier in the piece, passing the baton to their vaunted fast-bowling unit to wrap up victory a day early.

Hazlewood and Starc were the standouts on day four, with the duo sharing seven second-innings wickets as Pakistan succumbed to defeat despite manful resistance in spells.

FULL SCORECARD: Australia dominant as Pakistan churned up at the Gabbatoir

Pakistan resumed staring at a heavy loss, at 64 for three, after Australia made 580 in reply to the tourists’ first innings of 240.

A quick finish looked likely after the early wickets of opener Shan Masood (42) and Iftikhar Ahmed (0) left Pakistan at 94 for five, before the Australians were frustrated by two lengthy middle-order partnerships.

Babar Azam and wicketkeeper Mohammad Rizwan put on a 132-run stand for the sixth wicket, which threatened to send the match to a fifth day.

Spinner Nathan Lyon finally had Babar caught behind for a 173-ball 104, but there was more struggle in store for the bowlers as Rizwan and Yasir Shah (42) added 79 runs together.

Finally, however, Hazelwood had Rizwan caught five runs short of a century, triggering a terminal collapse in which Pakistan lost its last four wickets for 30 runs in the space of five overs, slumping from 305 for six to be all out 335.

Hazlewood finished with four for 63 from 21 overs to give him six wickets for the match, while Starc took three for 73 from 16.2 to go with his four wickets from the first innings.

Man-of-the-match was Australia’s Marnus Labuschagne for his superb knock of 185.

The second Test starts in Adelaide on November 29.